Why Is Your Baby Crying? 6 Reasons You Haven't Considered

It’s no secret that babies cry, a lot. They’ll keep you up all night in the first couple of months and it feels like whatever you do, you can’t stop them from crying. But the thing to remember is that there is always a reason for their crying, which means that you can stop them if you do the right things. If you know all of the possible reasons that a baby might be crying, you know exactly what to try which could make them stop. Obviously, you’ll try all of the normal stuff like changing their diaper, feeding them or putting them down for a nap, but those are only some of the reasons that they might be crying a lot. If you think you’ve tried everything already, have you considered these things? 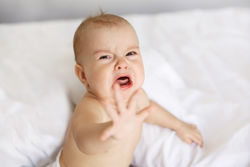 If you find that your baby is often crying a lot right after they’ve been fed, it might be a sign that they’ve got some tummy problems, usually excess gas. There are some over the counter remedies that you can get to solve this problem, usually made from sodium bicarbonate and herbs. They should be fine but, like anything else, it’s worth checking with your doctor before you start giving them to your baby. You can also try putting them on their back, pushing their knees up slightly and rocking them gently, they’ll soon release that gas and they should stop crying. If they’re wearing pants with an elasticated waistband, that can sometimes put pressure on their belly and make the pains they experience from gas a lot worse so it’s worth changing them into something a little looser.

Babies have incredibly sensitive skin so they’re prone to a lot of skin conditions which can irritate them and cause them to cry. One of the most common is baby eczema; the bad news is that it’s a genetic condition and if they have it, they’ll be prone to flare-ups for life. It’ll usually disappear when they get a little older but for now, you need to manage it. There are certain things that trigger flare-ups like the shampoo and cleansers you use on them. Make sure you’re using something that is kind to skin and doesn’t have too much perfume chemicals in it. Once you’ve bathed them, make sure that you’re using a lot of moisturizer on them as well. If the problem is particularly bad, speak to your doctor about steroid creams that can help the skin heal better and avoid raw, cracked patches.

As well as Eczema, you’ve got to watch out for Intertrigo. It’s a skin condition that usually affects babies under the age of 6 months. The problem is, it tends to appear in the folds of their skin because of a build-up of moisture which means it can often go unnoticed. Make sure that you’re drying inside those folds properly after bathing and if the problem continues, put some petroleum jelly in there to act as a barrier and stop the moisture from causing a rash on the skin.

They Want To Be Held

We always think of crying as a sign of some kind of problem. They need a diaper change, or they’re hungry, but that isn’t always the case. Sometimes, crying is just a way of telling you that they want to be close to you. Babies need to see their parents faces and be close to them to feel safe, if they haven’t been picked up for a while, they might just cry to remind you of that fact. People often worry about spoiling their baby by handling them too much but that shouldn’t be a concern. You might also just have tired arms, if that’s the case, get a sling and wear them on your front. That way, they’ll feel comfortable and you’ve still got your hands free.

That’s probably a phrase you haven’t heard before but it’s often the first thing that a doctor checks for if a baby seems to be crying for no reason. It’s almost impossible to spot but if a baby has a hair wrapped tightly around one of their fingers or toes, it can cut off the circulation and cause them a lot of pain. There isn’t really an easy way to prevent it but if you’ve tried everything and you can’t get them to stop crying, check their hands and feet to make sure there isn’t any hair wrapped around there.

You know when you put a top on and the tag in the neck scratches against you? It’s pretty annoying, isn’t it? For a baby, it’s a lot worse and it can cause them a lot of irritation. They’ll try to alert you to this problem by crying out. If you notice that they’re crying regularly when they’re wearing a particular piece of clothing, there’s your problem. Cut out the tags and you should find that they stop crying. If that doesn’t help, it might be that the fabric itself is irritating their skin. It’s tempting to buy the cheapest baby clothes because they’re likely to get covered in sick and food but if you want your baby to be comfortable, it’s worth spending a bit more on better quality fabrics. 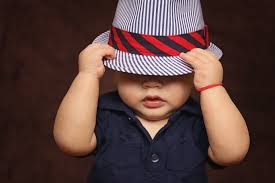 Babies learn by observing the world around them and it’s good to give them a lot of stimulation. However, their brains are not that developed yet and if there is too much stimulus around them, it can overwhelm them and they might start to cry. If there are a lot of people in the room, or it’s very noisy, it might get a bit much for them. Just take them somewhere quiet and let them calm down a little, you should find that they feel a lot better. For young infants, swaddling is a good way of calming them as well. It makes them feel safer in an environment that could get overwhelming.